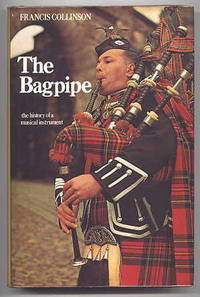 THE BAGPIPE: THE HISTORY OF A MUSICAL INSTRUMENT.

THE BAGPIPE: THE HISTORY OF A MUSICAL INSTRUMENT.

London: Routledge & Kegan Paul, 1975. 257 pp, large 8vo (9 7/16" H). B&w illustrations. "(A) fascinating full-length history of one of the world's most interesting and ancient musical instruments. The story begins in 3000 B.C. with the mouth-blown reed pipes, predecessor to the bagpipe. Mr Collinson looks at the history of this instrument as known in ancient Babylonia and Egypt, through the ancient Grecian Empire and Greece itself, to Rome and thence to Britain. He investigates the application of the bag principle to the mouth-blown pipes in Hellenic Egypt and Rome, and the first appearance of the bagpipe in Great Britain and Ireland in the eleventh or twelfth century. He describes the development of the bagpipe in the British Isles, its rise and gradual waning, leaving the Scottish Highland bagpipe and the Northumbrian pipes as the sole survivors. Having traced its evolution, the book goes on to narrate the fortunes of the 'Great Highland Bagpipe' itself. This is an account which encompasses the Jacobite risings and Culloden, and the Disarming Act 1747, by which the use of the bagpipe was more or less proscribed. It covers the great music of Pibroch, in the hands of the MacCrimmons and other pipers, and continues up to modern times. Appendices list the bagpipes of other countries and the materials used in the instrument's manufacture, and there is a comprehensive bibliography." Cigarette odour, previous owner's bookplate on front pastedown, small bookstore stamp on title page, minor browning in margins of pages, light browning to edges of textblock, slight corner bumps, very light edgewear, heavy indentation lines with tiny scuffs down spine - probably from binding process. Dust jacket is clipped, has light edgewear/wrinkling, browning to edges, two tiny dints on front hinge, crease down rear flap. . First Edition. Hard Cover. Good+/Very Good-.

We accept the following forms of payment:

VISA & MASTERCARD [If contacting us directly by email please ensure you provide the \'FULL NAME\' as it appears on your card, 4 digit expiry date, the full number on card, and the 3 or 4 digit CVV security on the back of the card]; Personal, Business or Cashiers Check; International Money Order or PayPal (PayPal e-mail is capricornbks@sympatico.ca) (Sorry, we are not able to process other credit cards directly at this time). Canadian residents will be charged 5% GST on converted amount.

SHIPPING: Shipping rates are based upon the weight of a standard size book (8vo) or a large format trade paperback up to 1kg (2.2lbs). Larger, heavier books will be shipped at cost. We will e-mail you a quote for your approval, before we ship. Mass market paperback books, in many cases, will cost less to ship to the U.S.A. and Internationally. We will inform you by e-mail or adjust the charge when we process your order.

RETURNS: Books may be returned if not as described within 10 days with prior notice. Please e-mail us prior to returning book - thank you.

Seller rating:
This seller has earned a 5 of 5 Stars rating from Biblio customers.
Biblio.co.nz member since: 2003
Oakville, Ontario
Ask Seller a Question

Welcome to Capricorn Books. We offer a wide range of used, out-of-print and antiquarian books in most subjects, for readers and collectors alike. Our business has been in operation since 1995 and we have been selling on the internet since 1999. We have a general stock with larger catalogues being Military History, History, Science Fiction/Fantasy, Children's, Art, Antiques. All orders are processed promptly. Our goal is to ship your book(s) within 24 hours and notify you when we have done so - we always try to keep you informed. Enjoy your visit!

edges
The collective of the top, fore and bottom edges of the text block of the book, being that part of the edges of the pages of a...[more]
spine
The outer portion of a book which covers the actual binding. The spine usually faces outward when a book is placed on a shelf....[more]
Bumps
Indicates that the affected part of the book has been impacted in such a way so as to cause a flattening, indention, or light...[more]
jacket
Sometimes used as another term for dust jacket, a protective and often decorative wrapper, usually made of paper which wraps...[more]
First Edition
In book collecting, the first edition is the earliest published form of a book. A book may have more than one first edition in...[more]
bookplate
Highly sought after by some collectors, a book plate is an inscribed or decorative device that identifies the owner, or former...[more]
hinge
The portion of the book closest to the spine that allows the book to be opened and closed.
title page
A page at the front of a book which may contain the title of the book, any subtitles, the authors, contributors, editors, the...[more]

George Romero co-wrote and directed Night of the Living Dead in 1968, a film that inspired the modern zombie craze and made an indelible mark on American cinema. Come this way, horror fan...