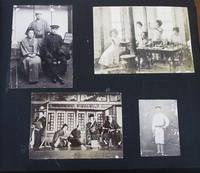 PHOTOGRAPH ALBUM OF 116 PROFESSIONAL IMAGES, MOSTLY FROM MIE-KEN, CIRCA 1895-1925, DURING THE MEIJI AND TAISHO PERIODS

PHOTOGRAPH ALBUM OF 116 PROFESSIONAL IMAGES, MOSTLY FROM MIE-KEN, CIRCA 1895-1925, DURING THE MEIJI AND TAISHO PERIODS

1925. Original photograph album. Very Good. Oblong, string-tied album of black cardstock leaves, 11" x 13", photographs mounted on 35pp, blanks at the rear. Bound in black, flexible boards with an embossed sailing ship and gilt lettering (Photo-Album) on the cover. Pasted in are 116 albumen and silver gelatin prints, ranging from small candids to 8 ½" x 10 ½" group portraits, a few fading, overall sharp and clean. Laid into the album are a Japanese news article, a small head-shot of an older gentleman, and a watercolor portrait (10" x 8 ¼") of a man's face. Most of the photographs in this album. circa 1895-1925, were taken in Mie-Ken (or "Mie prefecture"), part of the Kansai region on the main island of Honshu. The group and individual portraits reflect new social and economic developments and cultural norms that emerged during this period. Subjects are shown in either traditional Japanese garments or in Western dress. Group shots often depict people wearing both styles within the same picture. There are many group shots of schoolchildren of both sexes, young people in uniforms posed before buildings with Japanese signs on them, as well as many formal group shots of families, some "nuclear"-husband, wife, children- others extended by relatives. Individual shots of young children show them almost invariably in western dress, one posed with his tricycle, young boys in uniform, a young girl in kimono showing a dance move while holding a fan, infants in traditional robes, and young men in business suits. Several birdseye views feature very large groups of rural people in traditional dress, posed outdoors. Among the most striking photographs are: one (8 ½" x 10 ½") showing 11 doctors/ medical students posed around two corpses (one smiling happily) being dissected on two tables; four women and one man posed around a table doing handwork (weaving, tatting?); men in western dress, "strap-holding" inside a streetcar; and 5 actors (2 male, 3 female) on stage in costume. ~~ The Meiji period (1868-1912) saw the restoration of the Emperor (this time with a centralized bureaucracy behind him) after years of shogun rule. Japan was under heavy influence from Western political, economic, and educational models, and the country became more capitalist, industrial, and progressively democratic, offering free education to youngsters of both genders. Transportation and communications systems were modernized, the feudal lords and samurai lost their power, and a powerful national army and navy were created. By the early 1870s, the government declared all classes of people to be equal. The Taishu period (1912-26) saw the continued influence of Western culture, and values such as efficiency and individualism continued to replace more traditional ones. Japanese participation on the world stage continued to grow as the nation co-founded the League of Nations and emerged on the winning side in WWI. By 1925, there was universal male suffrage in Japan. Corruption in government increased, however, and the West began to form negative views of this newly-powerful, non-white nation, exacerbated by Japan's poor treatment of China.

Orders are packed and shipped from our business offices in the village of Roosevelt, New Jersey, USA . Packages are dispatched as quickly and economically as we can manage, via the shipping method that you select

All items are guaranteed to be as described. Any item may be returned within ten (10) days of receipt if found to be other than as described. Please give us advance notice of any return. A returned item must reach us in the same condition as when we shipped it. Original binding, text block, bookplates and any inserted material must be intact.

Seller rating:
This seller has earned a 5 of 5 Stars rating from Biblio customers.
Biblio.co.nz member since: 2004
Roosevelt, New Jersey
Ask Seller a Question

About R & A Petrilla, ABAA, IOBA

Established 1970, we are generalist antiquarian booksellers. We specialize in old and unusual books, manuscripts, and ephemera. We no longer sell at book fairs. Please see the catalogs on our website, or browse our stock for your interests. We are grateful for your orders. Thank you. -- Bob & Alison Petrilla Professional affiliations: American Antiquarian Society, ABAA, ILAB, IOBA, Library Company of Philadelphia, Philobiblon Club.

Poor
A book with significant wear and faults. A poor condition book is still a reading copy with the full text still readable. Any...[more]
gilt
The decorative application of gold or gold coloring to a portion of a book on the spine, edges of the text block, or an inlay in...[more]
leaves
Very generally, "leaves" refers to the pages of a book, as in the common phrase, "loose-leaf pages." A leaf is a single sheet...[more]
New
A new book is a book previously not circulated to a buyer. Although a new book is typically free of any faults or defects,...[more]