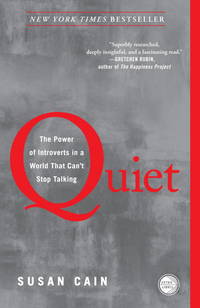 SUSAN CAIN is the author of the acclaimed New York Times bestseller QUIET: The Power of Introverts in A World That Can’t Stop Talking, which is being translated into over thirty languages and was named the #1 best book of the year by Fast Company magazine.  Cain’s book was the subject of a TIME magazine cover story, and her writing has appeared in the The New York Times; The Atlantic; The Wall Street Journal; O, The Oprah Magazine; Salon.com; Time.com; PsychologyToday.com, and other publications. Cain has also spoken at Microsoft, Google, the U.S. Treasury, and West Point. Her record-smashing TED talk has been viewed over 3 million times, and was named by Bill Gates as one of his all-time favorite talks.   She has appeared on national broadcast television and radio including CBS “This Morning,” NPR’s “All Things Considered,” NPR’s “Diane Rehm,” and her work has been featured in The New Yorker, Harvard Business Review, The Atlantic, Wired, Fast Company, Real Simple, Fortune, Forbes, PEOPLE, Scientific American, USA Today, The Washington Post, CNN, Slate.com, and many other publications.  She is an honors graduate of Princeton and Harvard Law School. She lives in the Hudson River Valley with her husband and two sons. You can visit her at www.thepowerofintroverts.com., and follow her on twitter (@susancain).

30 day return guarantee, with full refund including shipping costs for up to 30 days after delivery if an item arrives misdescribed or damaged.

Seller rating:
This seller has earned a 5 of 5 Stars rating from Biblio customers.
Biblio.co.nz member since:
Ajo, Arizona
Ask Seller a Question

We are independent bookstore affiliated with a weekly newspaper. Our store carries new and used books along with a few gift items and basic office supplies.

New
A new book is a book previously not circulated to a buyer. Although a new book is typically free of any faults or defects,...[more]

As the Star Wars franchise continues to grow, change, and churn out money-making film after film now under the control of Disney, we can bet that the desire to own Star Wars collectibles will also continue to grow. Check out our gallery of goodies from a galaxy far, far away...