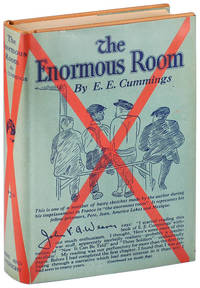 Description:
New York: Boni & Liveright, 1922. First Edition. The celebrated poet's first novel, and one of the great works of literature to emerge from World War I. Cummings drew heavily from his experiences as a volunteer ambulance driver in France, where he and his friend William Slater Brown were arrested for treason in August, 1917, after expressing anti-war sentiments in some of their letters. The Harvard-educated Cummings then found himself in the absurd situation of being imprisoned at a concentration camp with 30 other men in La Ferte-Mace in Normandy. In spite of the mends and small flaws, still the best copy of this title we've seen. Firmage A2.a. First Printing, first state, without the word "Shit!" deleted on the last line of p.219. Octavo (20.5cm); coarse tan cloth, with titles stamped in black on spine and front cover; dustjacket; [iv],viii,9-271,[1]pp. Signed by the author on the front endpaper. Decorative bookplate of Bayard L. Kilgour, Jr. on front pastedown, vintage booksellers ticket to rear… Read More
Item Price
NZ$20,421.25
NZ$7.35 shipping to USA 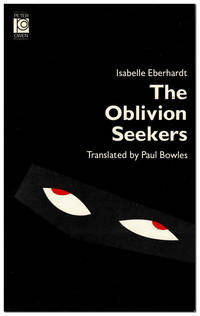 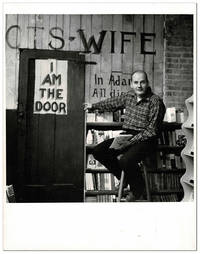 Description:
[San Francisco: S.i., 1959. Large, early photographic portrait of Lawrence Ferlinghetti, taken in the basement of his City Lights Bookstore a few years after it opened. Ferlinghetti is seated on a stool, a shelf of books in the background (including Kerouac's Mexico City Blues), pointing at a door painted with the words "I Am The Door." William J. Eisenlord (1926-1997) was a San Francisco photographer and owner of the Omnibus Gallery in Sacramento, best-known for his photographs of City Lights Bookstore, and the San Francisco jazz and beat poetry scene. His photographic archive is held by the Archives of American Art. Original black & white photograph, measuring ca.11" x 13.75" (27.5cm x 35cm), mounted to mat-board. With holograph note in graphite and ink on verso: "Photo by Bill Eisenlord / L. Ferlinghetti / in basement City Lights - 1954(?) / No Block. San Francisco." Light wear to extremities, small pencil notation and signature of R.E. Johnson along lower margin on verso; Near Fine.
Item Price
NZ$2,450.55
NZ$7.35 shipping to USA 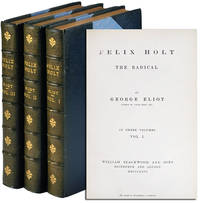 Description:
Edinburgh & London: William Blackwood and Sons, 1866. First Edition. Handsome set of Eliot's fifth novel, published in an edition of 5252 copies. A social novel, centered around the political disputes in a small, fictitious English town during the time of the Reform Act of 1832. Baker & Ross A8.1; Sadleir 814. First Impression. Three octavo volumes (20cm); three-quarter navy blue crushed morocco and denim blue cloth, bound by Bayntun (Riviere); spines in six compartments, with five raised bands, and titling and floral decorations stamped in gilt on spines; marbled endpapers; top edges gilt; [iv],303,[1]; [iv],290; [iv],283,[1]pp. Half-titles present in each volume, though Vol.3 lacks the ad leaves [258-288] ("absent in some copies," Baker & Ross, p.228). Spines uniformly faded to a pleasant blue-green, with a few pinpont rubs to same; faint, tiny stains to the corners of a few leaves in Vol.1; some occasional, very faint foxing to margins, though on the whole, the text is quite fresh; Near Fine.
Item Price
NZ$1,225.28
NZ$7.35 shipping to USA 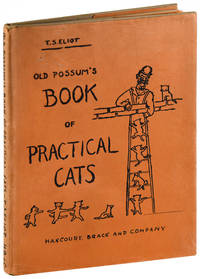 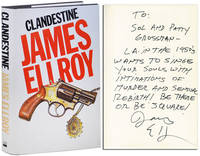 Description:
London: Allison & Busby Ltd, 1984. First UK Edition. Ellroy's second book, first published by Avon in 1982 as a paperback original; the British edition is the first and only hardcover format of this title. An important novel in the Ellroy canon, as it marks the first appearance of his character Dudley Moore. Copies signed by Ellroy (with his initials) are plentiful - copies with lengthy, early inscriptions are not. First Impression. Octavo (22.25cm); black cloth, with titles stamped in gilt on spine; dustjacket; [vi],342pp. Inscribed by the author in an early hand on the front endpaper: "To Sol and Patty Grossman - L.A. in the 1950's wants to singe your souls with intimations of murder and sensual rebirth! Be there or be square! James Ellroy." Fine in a Fine, unclipped jacket, with light fading to author's name on the spine.
Item Price
NZ$326.74
NZ$7.35 shipping to USA 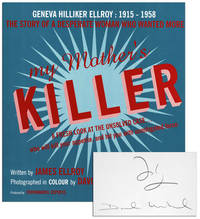 Description:
[Paris]: Coromandel Express, 1998. First Edition. A collaborative interpretation of the events surrounding the unsolved 1958 murder of James Ellroy's mother, Geneva Hilliker Ellroy, as recreated by noted photographer David Levinthal in a series of stylized miniature tableaux. Ellroy originally published "My Mother's Killer" in GQ magazine in 1994 - a searing account of how and why he decided to reopen his mother's unsolved case. Levinthal's photographs were produced specifically for this edition. OCLC notes 2 holdings (NYPL, Smithsonian). One of 55 numbered copies signed by the author and photographer. This copy unnumbered, but Levinthal's own copy, inscribed by him to American bookseller Glenn Horowitz inside the title leaf, by way of thanks for mounting an exhibition of his work: "To Glenn - with all my thanks and very best wishes - David Levinthal." Square folio (32.5cm); two bifolium leaves (title leaf and colophon), together with six tri-fold leaves, each containing an archivally housed color… Read More
Item Price
NZ$8,985.35
NZ$7.35 shipping to USA 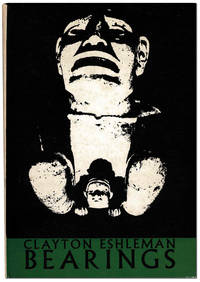 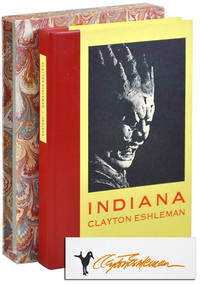 Description:
Los Angeles: Black Sparrow Press, 1969. First Edition. Deluxe Issue, one of 26 lettered copies specially bound and signed by the author, each with an original holograph poem, this being copy 'F'. Octavo (24.5cm); photo-illustrated paper-covered boards and red calf backstrip, with title label applied to spine; publisher's original acetate dustjacket; 178,[6]pp. PInpoint wear to base of spine, else Near Fine in a lightly rubbed, Near Fine dustjacket (which has a tendency to stick to the backstrip, with no detrimental effects). While not called for, laid into this copy is a Fine example of the original publisher's prospectus. Housed in a custom marbled paper slipcase. Morrow & Cooney 64c.
Item Price
NZ$204.21
NZ$7.35 shipping to USA 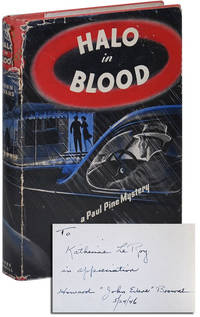 Description:
Indianapolis: The Bobbs-Merrill Company, 1946. First Edition. The hand-boiled author's first book, and the first to feature Chicago private detective Paul Pine. "Paul Pine, solo sleuth, from a pauper's funeral to a five body carnage, is almost sunk without trace by the girl whose marriage he is to prevent. Pine's snooping lands him in wrong with the police, gets him quite a view of Chicago's underworld, and earns him more than one manhandling, until the answers are opened up by the girl - in not quite the way he thought" (Kirkus Review). The earliest inscription we have seen on any of the author's books. Hubin, p.134. First Printing. Octavo (19.75cm); red cloth, with titles stamped in gilt on spine and front cover; dustjacket; 245,[9]pp. Inscribed by the author the day after publication on the front endpaper: "To Katherine Le Roy / in appreciation / Howard "John Evans" Browne / 5/24/46." Spine ends gently nudged, beginning oxidation to gilt titling, with a small, faint splash mark to upper edge of… Read More
Item Price
NZ$735.17
NZ$7.35 shipping to USA 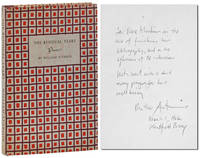 Description:
New York: New Directions, 1948. First Edition. Attractive copy of Everson's first major collection, gathering selections from his previous volumes, together with at least one unpublished poem and a three-page preface by the poet. Warmly inscribed to his preliminary bibliographer, the poet and editor David Kherdian, who included Everson's work (alongside that of Ferlinghetti, Snyder, McClure, Meltzer, and Whalen) in his 1967 work Six Poets of the San Francisco Renaissance: Portraits and Checklists. Bartlett & Campo A9. First Printing, one of 1,000 copies. Octavo (23.25cm); burgundy cloth and patterned paper-covered boards, with titles stamped in gilt on spine; red topstain; dustjacket; 148,[2]pp. Inscribed by the author on the front endpaper: "For Dave Kherdian on the eve of finishing his bibliography, and on the afternoon of the interview / With best wishes and every prayer for his well being / Brother Antoninus / March 1, 1966 / Kentfield Priory." Upper right corners gently tapped (though still… Read More
Item Price
NZ$735.17
NZ$7.35 shipping to USA 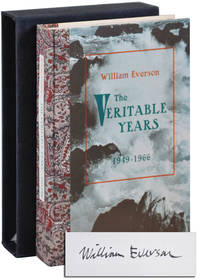 Description:
Santa Barbara: Black Sparrow Press, 1978. First Edition. Attractive copy of the second installment in Everson's "The Crooked Lines of God" trilogy. The holograph poem is untitled, though Everson states it is "from Gethsemani", written on Holy Thursday, 1978. Uncommon in the deluxe issue. Morrow & Cooney 306d. Deluxe Issue, one of 50 numbered copies specially bound and signed by the author, each with an original holograph poem (this being copy no.5). Octavo (23.5cm); photo-illustrated paper-covered boards and paisley patterned cloth backstrip, with title label applied to spine; publisher's original acetate dustjacket and slipcase; 346,[26]pp. Fine in a lightly rubbed, Near Fine dustjacket, with the publisher's review slip laid in; cloth slipcase shows mild wear and handling; Very Good+.
Item Price
NZ$408.43
NZ$7.35 shipping to USA 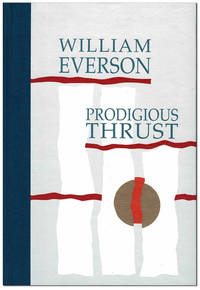