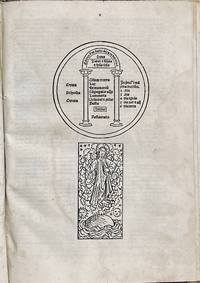 Description:
Folio [A]8 [a-g]8 [h]10 75 leaves without signatures or page numbers (9 leaves, 1-66 foliated ), 3 columns in table, 59 lines and foliation, gothic letter, 2 large ornamental initials, 59 woodcuts, one full-page, woodcut diagrams. Fifth and last Venetian edition, and fourth Ratdolt edition being the most complete edition of Rolewinck s chronological history of the world. The chronology follows a double time-line, measuring time from both the Creation and the birth of Christ to the death of the Ottoman Sultan Mehmed II commonly known as Mehmed the Conqueror in the year 1481, demanding a remarkably complex typographical layout. The Fasciculus Temporum (Little bundles of time) was the first book printed on history of the world, it is also one of the earliest and greatest of illustrated incunabula. The illustrations show Noah s Ark, the tower of Babel and contain several town views including Jerusalem, Syracuse, Rome and the Doge s Palace in Venice. Rolewinck (1425-1502) was a Carthusian monk and… Read more
Item Price
US$10,000.00
FREE shipping to USA 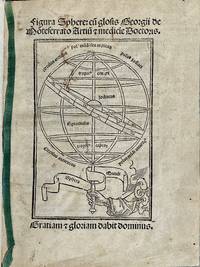 Description:
Quarto. 26 lvs, A-E4 F6 . There is a large woodcut on title page 'sphera mundi', see to the left and three other large woodcut diagrams in text. Woodcut capitals, also spaces with guide-letters. Tear repaired in corner of f. 2, with some text loss.
This illustrated incunable is printed by Jacobus Pentius, de Leuce who started printing in 1495, his press was chiefly active after the turn of the century. In 1220 Sacrobosco wrote Tractatus de Sphaera a book on astronomy in four chapters. The first chapter deals with the shape and place of the Earth within a spherical universe. The second chapter deals with various circles on the sky. The third chapter describes rising and setting of heavenly bodies from different geographical locations while the fourth chapter gives a brief introduction to Ptolemy's theory of the planets and of eclipses. This book, which predates Grosseteste's astronomy book, is well written and was widely used throughout Europe.
Goff J421; Klebs, A.C. Incunabula scientifica et… Read more
Item Price
US$11,000.00
FREE shipping to USA