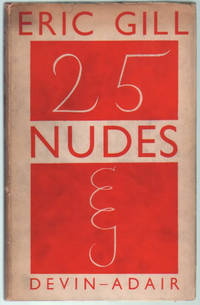 Eric Gill (1882-1840) studied at Chichester Technical and Art School before moving to London in 1900 to train as an architect with W.D. Caroe. Soon frustrated with his training, Gill took evening classes, both in stonemasonry at Westminster Technical Institute and in calligraphy at the Central School of Arts and Crafts. By 1903, Gill gave up his architectural training to become a calligrapher, letter-cutter, and monumental mason. The next year, he married Ethel Hester Moore. Gill moved his wife and daughters, Betty, Petra, and Joan, to Ditchling in Sussex in 1907, and then, in 1913, to Hopkin's Crank in Ditchling Common. Gill became a Catholic in 1913 and co-founded the Guild of St Joseph and St Dominic, a religious community of craftsmen a few years later. Soon after, Gill also co-founded the Society of Wood Engravers. In 1924, left Sussex with his family to settle in the ruined Benedictine monastery at Capel-y-ffin in the Black Mountains of Wales.

Four years later, Gill moved his family to Buckinghamshire and soon received commissions from bibliophile publishers, including Golden Cockerel Press, Cranach-Press, Faber & Faber, J.M. Dent & Sons, and the Limited Editions Club. Gill's association with the Golden Cockerel Press during this time seems most significant. His first two commissions for the publisher, Song of Songs (1925) and Procreant Hymn (1926), although tame by modern standards, were illustrated fairly explicitly and were considered risqu� for the time. This necessitated the press taking precautionary measures against possible prosecutions for obscenity or provocation. His next project for Golden Cockerel was a four volume edition of Canterbury Tales (1929 to 1931), the printing of which dominated work at the press for two and a half years. Relatively few other books were printed by Golden Cockerel during this period, though Canterbury Tales, considered critical for the press, was deemed a financial success. In 1931, Golden Cockerel published Four Gospels with woodcut illustrations by Gill. There were only 488 copies ever printed, just 12 of which were printed on vellum. Four Gospels is considered to be both one of Gill's greatest achievements as an illustrator and one of the finest works produced by Golden Cockerel . It also represents the first work for which Gill not only created the illustrations, but also designed the typeface, which became the standard Golden Cockerel font. Gill died of lung cancer in 1940.