The famous Mystery Pier Books, Inc., called "One of the Most Important First Edition Bookshops in the U.S.", regularly featured on TV: CBS SUNDAY MORNING, to EYE ON L.A., & more); in the In Flight magazines of Alaska, & Delta Airlines; the Louis Vuitton Guide, Lonely Planet & other travel guides; in the major national entertainment magazines (cover story in MONEY magazine to "Best of the Best" edition of LOS ANGELES MAGAZINE); & listed #1 in the Ten Best Hidden Gems of L.A. 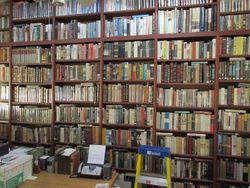 I am a internet based bookstore that specializes in Modern First Editions, film sources, Mystery and Detective fiction and Western Americana. I have approximately 10,000 books, primarily first editions with about 1300 of them signed by the author. I try and stock only books that are sound, clean and attractive.