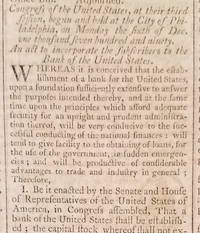 Description:
This newspaper contains one of the earliest printings of An Act to Incorporate the Subscribers of the Bank of the United States, one of the key elements in Alexander Hamilton's design for the American financial system. The Act, beginning on page two and continuing on page three, is signed in type by President George Washington. The newspaper was printed in Philadelphia, then the capital of the United States, on the day after it was signed by Washington. An historic printing of an important act in establishing the new nation's financial system. Condition: 4 pp. Disbound; leaves nearly separated at the spine. Minor chipping. Occasional areas of faint impression. [ICN 3731.]
Item Price
US$6,500.00
US$10.00 shipping to USA